In 1481 Pope Sixtus IV confirmed in his Bull, “Aeternis Regis”, the sphere of influence for Portugal and Spain in the Atlantic Ocean. This eventually became known as the Line of Demarcation. In 1495, Jaime Ferrer [1], cosmologist, wrote to Their Majesties of Castile two letters explaining the 370 league distance measure that was incorporated in the Bulls. In 1528, Jean Fernel, a Frenchman, wrote “Cosmotheoria” [2], a text dedicated to King Jaoa II of Portugal and there-in indicated a methodology to determine a degree of latitude measurement. Both however indicated a spurious measurement consisting of 700 stades which was derived from Eratosthenes “Geographia”. There was therefore in that age a complete lack of understanding of the measurements and thus errors in research. However, the greatest problem appears to be the research into the voyage of 1492 and the distance measure of C Columbus described in various terms but never detailed correctly.

The whole text is 17 A4 pages including appendices and 3 diagrams. 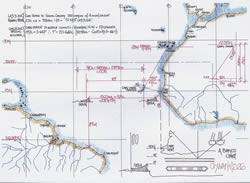