Pliny the Elder, Gaius Plinius Secundus (23CE-August 25th, 79CE) was a Naval and Army commander and friend of the emperor Vespasian. Pliny’s last text was the “Naturalis Historia” completed in 77CE. It is an encyclopaedia of available knowledge and comprises History, Geography, Botany, Zoology, Astronomy, Geology and Mineralogy.
Unfortunately his sudden and unexpected death whilst endeavouring to rescue persons trapped by the eruptive force of Vesuvius meant that this text was both perhaps his greatest and last.
The geographical fragments included there-in, are from many sources; each is attributed to the original author and traveller as the case may be. These people generally existed just before our common era, but also as far back as Eratosthenes (285-194BCE), and thus provide a marvellous insight into the Geography of that age. It pre-dates the work of Marinus the Tyrian and Claudius Ptolemy, who were active from the end of the first century to the latter part of the second century CE, but, it is contemporaneous with the “Geography” of Strabo. However, it appears that Pliny was not aware of that text.
This text is not a comprehensive analysis of Pliny’s work, but a selective overview to establish the overall extant world view that appertained in the first century of our common era. It is also the pre-cursor of a second text, cgPl2, which investigates the map or maps available to and studied by Pliny. 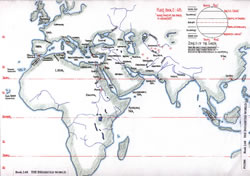 This text started as an appraisal of the notes Leonardo da Vinci made upon the Geography of the World as he understood it. They were to be part of either text ChGEN/1 or its counterpart ChGME/1, but were unsuitable within either text. Thus when asked to read another text regarding Globe Gores and the link to Leonardo da Vinci, entitled “America’s Birth Certificate”, I resurrected the text for the introductory passage as it completely matched the discussion within this new text, although it showed the new text to be fallacious in much of its measurement details. It is thus a text of two parts but introduces many more research notes I had accumulated and tend to contradict the new text; but that is for others to decide as conclusive evidence is lacking on certain aspects of who did what. 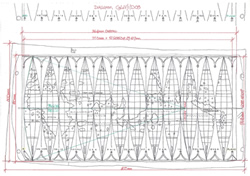