The charts within ‘Atlante Nautico, 1436 ’, are all drawn upon the same size parchment, 260 x 380mm, which in all probability was produced as sheets measuring 262 x 393mm, 1 x 1 ½ Palmo and hence the measurement system of the charts can be assessed. The wind rose is constant upon each chart at 240mm which is thus 11 uncia, (the 262mm is 12 uncia, 1 Palmo). However the chart scales differ, but, they can all be shown to be drawn by the same hand, that of Andreas Biancho. However the last sheet, the Ptolemaic World map, although included in ‘Atlante Nautico’ may not be by Andreas Biancho, and thus its very individual form, its non-alignment to other similar maps is questioned. 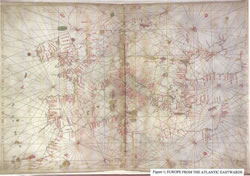 The subject of the Portolan chart is fraught with difficulty, particularly how were they constructed. This text is the description of a forensic examination of the Jorge de Aguiar Portolan (1492) by redrawing, line by line, from basic principles. Used here-in are also many texts to illustrate preceding research. The conclusion is that they were very simply drawn using a graticule, not generally a circle, and a template or pattern was utilized to draw the map itself.

Note, this paper in a basic form was sent for referee’s comments which are included here-in. 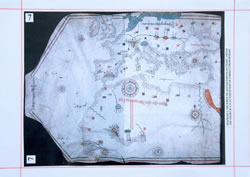 The portolan’s of Angelino Dulcert and Jorge de Aguiar are again examined but this time to establish the minutiae of the maps draughtsmanship, as opposed to the preceding text, “Portolan Charts; Construction and Copying”, [ref. ChPo/1] which examined how the whole Portolan could have been drawn. The method of examination chosen is by a redrawing exercise as opposed to a cartometric programme. A paucity of node points and the tendency to produce curved lines which are not part of the Portolan repertoire are the basic reason for the non utilisation. This paucity leaves large areas of sea and tracts of land behind the littoral subject to an averaging of the distortion grids and a tendency therefore to perceive the plot as correct, when in fact it is not.

Thus from an initial visual appraisal of the map to a detailed point by point recognition of the maps form, how they were first conceived and then drawn, the process becomes apparent. 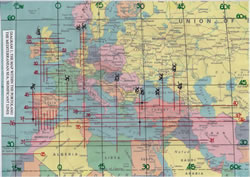 Although research into the Portolan Chart genre has been extensive, it appears not one researcher has actually tried to draw a Portolan Chart from first principles. This fact is bemoaned by many persons who consider themselves expert in the field, have written extensively about these charts, but have never drawn a chart or tried to copy one. It is therefore pertinent to ask if the research is all it should be. Why has it not happened?

This text follows the process of a chart from its very basis, the vellum or parchment upon which it is drawn, to the draughtsmanship of the chart and finally how it could be successfully copied without the process being visible upon either the master copy or the second copy. Many texts are used in the analysis and found to be wanting. 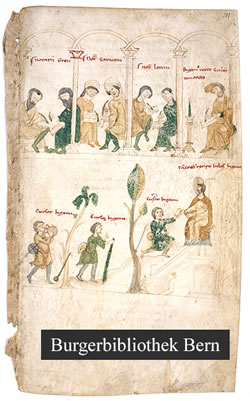 When the Portolan chart was developed in the 13th century, it was covered by a myriad of lines to represent wind directions. These were to assist mariners to gauge the sailing direction from port to destination and also correct their course when adverse winds affected the sailing direction. However, as it was then mainly coastal sailing and not open sea crossings the usefulness of the myriad of lines is questioned .
But, distances sailed could be taken from a chart, (the scales were so very small and thus inaccurate), or read from the more accurate Portolano, a list of ports, inter-distances and obstacles to be avoided. As the distances became greater and more routes were across open seas, not coasting, accuracy in the direction sailed and distances covered became necessary. The magnetic compass was one tool giving direction, but its accuracy was poor and possibly not understood, and distance had to be measured by empirical means; inaccurate!
Hence it became necessary to record actual distances sailed such that when adverse winds affected the course, distances off course and then the return course and distance could be calculated. The return course was generally a logical extrapolation from the wind rose; that is if the ship was blown one quarter wind south of the intended course, the return course would be one quarter wind to the north with equal sailing distances involved. But if the off course sailing was the resultant of many tacks it was necessary to know how far had you sailed, how far off course you were and how far you must sail on a return course to find your original course, and that required calculating; an arduous task with doubtful accuracy.
Thus the Marteloio was developed and improved perhaps by usage. What usage it had is unquantifiable as it does not appear in the texts or notes of many mariners. And we must also note that most sailing was done along shorelines not across open sea for hundreds of miles as the Marteloio accommodates. Thus a degree of scepticism is required of Marteloio.
There are four sections to the text covering differing Marteloio papers with new diagrams. 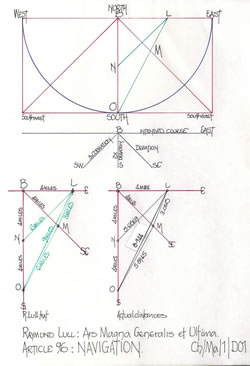 The Portolan charts of Genoa (or Italy) commencing c1300AD through to +1500AD are all basically constructed from the same Pattern/Template as has been clearly shown in text ChGEN/1. They commenced with Petrus Vesconte and climaxed with Vesconte de Maiollo and then the Maiollo clan’s work.

But two eminent practioners of the “art of painting” charts, escaped to warmer climes and the first of them kick started what can only be described as a “golden” period for Portolan Charts and their decoration on the Island of Majorca. The second augmented the genre and ensured the origins of the Portolan Chart, basically Northern Italy/Genoa, was perpetuated by the continual usage of the original Pattern/Template for the Mediterranean Sea Basin.

Thus this text follows on from the Genoese exploration of the continued usage of a singular Pattern/Template and further explores the cross fertilisation from City to Island and around the Mediterranean Sea. 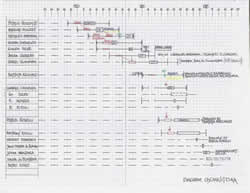 The Liverpool University Chart reference LUL MS.F.4.17 is small by Portolan Chart standards as it is now only 40 x 25 ½ inches having been sadly reduced on all sides. But it is richly decorated and there is hardly a square inch of vellum untouched. However it is an anonymous chart from both cartographer date and place of drawing. Hence it requires a complete analysis to establish its provenance.

This is not a normal Portolan decorated to order but a work made to impress a client or recipient in perhaps the highest category of society. But it is clear that by studying the chart in depth for the first time the answers lay inside its draughtsmanship for all to see. 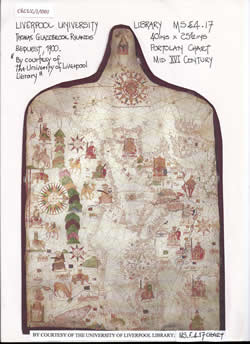 The Reinel Family, Pedro and his son Jorge and the Homem Family, father Lopo and two of his sons Diogo and Andreas are highly regarded as Portuguese cartographers of the 16th century. However, much is unknown and hypothesized upon to an undue extent. This text sets down the timelines and indicates the errors in previous texts and then discusses their complete works. It should be noted that two texts already exist, ChDgH/1 and Ch MES/1 and they should be considered part of this text which has two distinct sections as coverage for the two families.

Unfortunately owing to the present health crisis in the world accessing Libraries etc has proven very difficult, as is to be expected, and thus I have chosen to use some photo engravings from Portugaliae Monumenta Cartographica, Volume 2 to ensure full coverage. 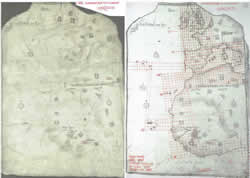 The discovery of the Northern lands, Newfoundland, Labrador, Greenland and their mapping obviously gave cartographers of the early 1500’s problems. Not only did the land extend northwards far beyond the basic 75N of Europe, to at least 85N, but it contained a myriad of Isles many seen or glimpsed through snow and ice. But, the magnetic compass sometimes used, but not understood, was also badly affected as they headed northwards towards the Magnetic North Pole. That of course was a point they had no actual knowledge of.

Then Pedro Reinel on his 1504 chart, one of the first charts to illustrate these new lands, decided that they could not be shown geographically positioned and drew what information he had, and included an Oblique Latitude Scale set at N22 ½ E and marked off latitudinal degrees with the same measurement as the main vertical latitude scale. Thus the die was cast for chaos to ensue in theoretical cartography with later cosmologists developing outlandish theories concerning the magnetic compass which they did not understand.

This text unravels the actuality from the outlandish and shows the simple answer. 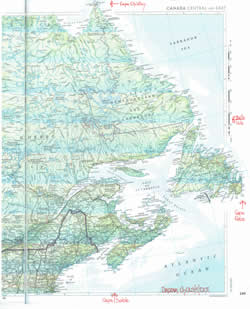 Reams of paper have been written and used to discuss the Atlante Nautico (Atlases) of Baptista “Januensis”, which total a prodigious output over some 30 years (1536-1564). But that is totally wrong because very little notice has been taken of the 12 or 13 actual Portolan Charts which had to be drawn to enable the Atlases to be constructed of individual folios which make a whole chart. The first is dated 1514.

This text studies each Portolan Chart individually and endeavours to place them in a logical order for drafting from 1514 to 1562. There are only two Portolan Charts actually attributed and dated, although others have been cut back and that information lost, thus their form and content must be utilized. Thus the atlases should be from 1514 to 1564! 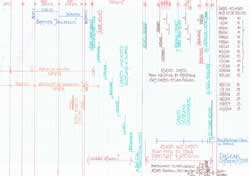