The earliest Portolan Charts numbered C1 to C4 in “Les Cartes Portolanes” and the Lucca Chart are compared to each other and a Geographical Mercator chart. Thus the similarities of draughtsmanship can be observed and as only one set of Portolan Charts by P Vesconte (C3+Atlas) are signed the opportunity of possibly attributing anonymous charts becomes viable as the outlines coincide, in one instance spectacularly. 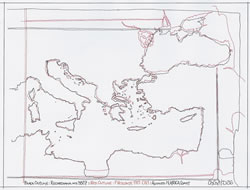 The conclusion to my text ChCs/1 is that the Riccardiana ms 3827 chart was in all probability an original Pietro Vesconte Chart and dated from 1300/1310AD. Via my draughtsmanship/cartographical evaluation it was shown to be the template for the later charts and atlas of Pietro Vesconte. Now continuing the comparative study with five more charts as noted below, the Riccardiana ms 3827 chart would appear to be the template, or its copy or predecessor, the template for other known and unattributed charts of the period. There are minor deviations in the construction of charts discussed and perhaps following this evaluation a re-ordering of some in the L.C.P. sequencing may be found necessary. 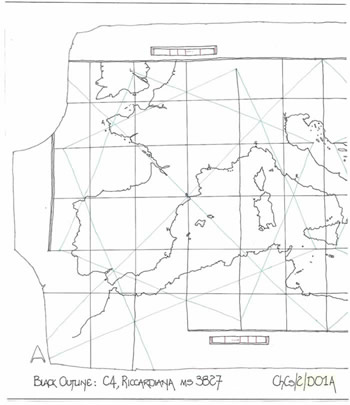 The accuracy of Portolan charts has been shown in my previous texts, ChCs/1 and ChCs/2 where I have compared them to each other and a geographical Mercator map.
But in 1987 J T Lanman wrote “On the origin of Portolan Charts” and within chapter 8, “A proposal for the origin of Portolan charts” he wrote 6 sections (large paragraphs) and a concluding paragraph. The 6 sections are Data Base, Projection, Skewing, Purpose, Distortion and Contemporary evidence.
This text illustrates that J T Lanman was misguided in his theoretical approach, when he concluded that an accurate chart could be drawn from the data within the coastal section of the text, “Lo Conpasso de Navegare”, when it patently cannot. He also concluded there was a magnetic declination used to plot the coastal courses within the text. Then he used a square grid for his reconstruction which has been shown to be nonsensical. The graticule is rectangular and although it appears to accord to a Mercator map, that is coincidental.
That his points are spurious is amply illustrated in this analytical text. It is necessary to point out though that J T Lanman used a text with many errors for the distances and bearings, and appears not to have cross checked the distances from the Peleio route distances which are multitudinous within the text and generally very accurate.
Thus I am able to add a postscript to this analytical text which has a surprising conclusion concerning the actual possibility of drawing a map from “Lo Conpasso De Navegare”. But it is nothing to do with J T Lanman’s theoretical charts.
This text is a précis of my complete analysis of “Lo Conpasso De Navegare” carried out to investigate the possible uses for the text and its accuracy. It concentrates only on the Western Mediterranean Sea area from the Pillars to Sicily, as a means of curtailing the text. 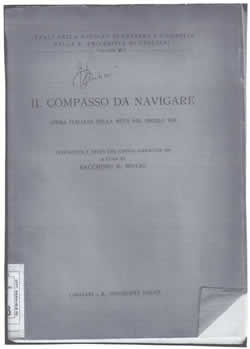