Having analysed “Lo Conpasso de Navegare” “Grazia Pauli” and “Liber de Existencia Riveriarum” texts to produce my text ChLCN/1, and then compared it to “The Carta Pisane” in text ChCpS/1, I concluded that the LCN text in its “Starea” section was unfit for purpose as the basis for constructing a chart. However, the Peleio section of LCN could be the basic data with which to draw a map or chart from the matrix that could be produced there-from. Although Peleio distances correctly positioned a large number of coastal features they required evaluating to determine if they were the actual basis of the Portolan Chart construction. But of course the LCN does not include the Atlantic Sea area!
Starting with the Peleio distance/directions, all +300 of them plotted on a series of maps, I concluded that a triangle formed the basic reason for the choice of node points. The points interlinked to cross locate from many of the coastal features. In fact a considerable number of the individual Peleio distance/direction notations were very accurate such that there could be NO magnetic deviation within the text details.
There were however many obvious scribal errors both for distance and direction when evaluated against a geographical map. Most could be shown to be attributable to poor copying, scribal error, but one section is solely responsible for the apparent distortion of the charts, which has led to the belief in a magnetic deviation.
My conclusions are that an original form of LCN Peleio data was used to draw the Portolan Charts. I believe the origin is probably from the Roman Period 300BCE to 300CE: there is no magnetic deviation at all in the charts draughtsmanship: the inaccuracy of the map plot is attributable to the mistaken distance measures from Sardinia to N Africa which imparted a bias in the map plot: the measurement used on the early charts is derived from the Roman Mile of 1.47911KM as one chart actually indicates.
This text cannot itemize every single Peleio; the majority are on the diagrams within this text and in the two previous texts, but where it becomes impossible to read alignments due to the sheer complexity of lines I have chosen for clarity of presentation to use a minimal number of Peleio triangle distances and thus simple Distance/Directional information.
I am sure interested parties will be pleased to draw the data for themselves and submit results. I also suggest the diagrams are downloaded, printed and joined to form large single maps (they are marked for that purpose) which will explain the twist and its false representation as a magnetic bent. It will also show that the simplest of presentations which have been misread as possible projections are nothing more than the result of drawing from a central alignment both east and west. Thus the natural positioning of a node point from the triangles causes the supposed projection. I repeat, there is no magnetic deviation on a Portolan chart!! 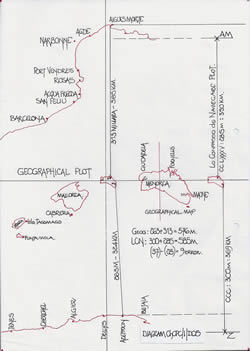 The Cortona Chart is often linked with the Carta Pisane (LCP, C1) because of the perceived similarity of presentation, its draughtsmanship and the coastlines. In my text ChCPS/1, The Carta Pisane, I fully analysed that chart’s construction and its basic internal knowledge. This text analyses the Cortona Chart in a similar manner and juxtaposes “LCP” pages 511/512 text with my findings. The resultant research illustrates that there were a multitude of “LCN” type texts used throughout the first period of the “Library Style” Portolan Charts, following the end of what must have been a massive flotilla of ships virtually constantly at sea to service the Crusades and trade that went with them, but no doubt using smaller and easily handled maps and complementary texts, Portolani + Chart.
This text starts with the Black Sea area on the chart, discusses the separate scale utilised and then the textual data available which is not apparent upon the chart. A section of the text has already been published in ChMAT/1, and is here-in appended, un- revised but very necessary to complete the research which follows the prime discussion of the Black Sea area. I have also indicated the “distortion” positions within the chart which not only make it accurate in a serendipitous manner, but show its construction from an “LCN” text. Finally, the reason for the charts distortion is revealed, simple distance measure errors which combined to visually confuse previous researchers into thinking there was a magnetic element; there is not. But why the draughtsman chose to use two differing scale bars can be answered only speculatively. As an extra discussion the Black Sea is investigated in a short essay reference ChBLS/1. The same change of scale on other charts and atlases and the actual form that can be obtained from the” LCN” text is drawn, which confirms the fact that a “Alpha Chart” was available and several “LCN” texts of varying quality.
Draughtsmanship before history and you will solve a great deal more far easier! 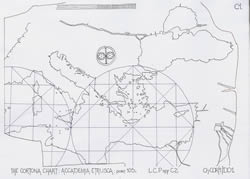 Having analysed the Atlases LCP A1 to A14, concerning the Iberian Peninsula and established that there was a complete lack of knowledge apropos the actual distance measures utilised and that the unit of measures were also confused, it was necessary to proceed along the time line for Atlas Charts to further our information concerning their inner workings and establish if the problems encountered were in fact solved.
Hence as the BNF Paris had excellent scans of the Atlases by Diogo Homen and that fortuitously they had featured in my first Portolan Book from Thames and Hudson, I knew they would shed light upon the subject. Thus a complete analysis of two beautifully drawn Atlases by Diogo Homen was undertaken, as well as an analysis of one of his excellently drawn Portolan charts, to establish the extra knowledge gained over the ensuing +100 years from 1434 to 1559AD. Unfortunately the results were very disappointing and add little to the original data which has been compiled as the problems persisted with no new knowledge.

The text consists of 6, A4 pages and contains 17, A4 diagrams 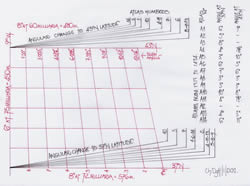