Throughout previous texts I have shown that the inner workings of Portolan Charts and Atlases indicate several distorting factors which have the effect of slewing the chart anti-clockwise from c3 to c11 degrees. That difference can be evaluated as the accuracy of the charts author in his draughtsmanship. But a study of the Iberian Peninsula showed that the basic slewing was in fact c12 degrees and emanated from one single fact; the draughtsman had used two distinct measurements for a degree of latitude which are in fact the same measurement in different forms but had used a single scale bar to measure them, thus totally ruining any accuracy that may have been possible. Therefore the Iberian Peninsula has the in-built potential to totally slew the whole chart by c12 degrees.
But that appeared to be a rather curious situation akin to the tail wagging the dog.
Thus I considered that the problem is in fact the opposite; that is, the chart was first drawn with a 12 degree slew anti-clockwise, then the Iberian Peninsula was tacked onto the chart, which would be correct if it was, as I have suggested previously a Roman Map. As the Roman World expanded the chart grew to encompass all of their lands and thus was not necessarily at first a full Mediterranean Sea basin map, but evolved from several forms.
Marcus Vipsanius Agrippa produced a “world” map in c11BCE following a “world survey” instigated by Julius Caesar in c54BCE, and that map was displayed in Rome.
Thus using extant Roman Texts this paper sets down the scenario for the 12 degree slewing of one of the original Roman Charts and how it developed into a Portolan Chart.
I have added to this text the work by Joan Blaeu, not for his charts but for his written words which discuss many of the problems I have uncovered. 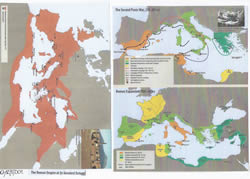 The Planisphere copy has garnered many plaudits from the historical and cartographical communities for its sumptuous presentation and scope of its geography. Many historians and cartographers have written treatises concerning its contents and endeavoured to illustrate that which it portrays through technical means.
Each and every one of these researchers has completely missed the most obvious and determining part of the design by generally adhering to preconceived ideas, instead of detailed analysis of the actual chart and its construction.
This text shows that the original Portuguese cartographer was a master artist and mathematician/geometrician who understood the necessity for constant measurement, but was thwarted by the data given which obviously consisted of a myriad of measurements named the same but wildly differing. Add to that the inability to transcribe Arab “Kamal” readings to either distance or latitude and only draw what was described thus the problems mounted.
The Planisphere copy must be investigated section by section to expose the problems the cartographer encountered, but overcame, to produce this feast for the eyes.
One question I fear will never be properly answered however is, “just how accurate is the copy we are now studying”? Personally I suspect that it is not copied, but the work of the original atelier, or persons of the original atelier and thus it is probably very accurate and the distance measures originally used are perfect, as the wind rose graticule which is so very accurately constructed illustrates.
Being produced by the original cartographic atelier, or those cartographers, it would explain other problems encountered in the research. That idea is very plausible as will be adequately indicated within the text pages.
Note; I have used my copy of the CD-ROM from Biblioteca Estense Universitaria for the Cantino research and diagrams illustrated. It was produced by Il Bulino + Y Press, 2004.

THE CAVERIO 1505AD PLANISPHERE
The Caverio 1505AD Planisphere has been variously quoted as being copied directly from the Cantino 1502AD, or as having very similar origins. Those are probably copies of copies of the “spare” planisphere no doubt kept by the original atelier for future charts to be drawn from. That it is a copy of a Portuguese chart is undoubted from its toponyms and content, but the chart requires to be analysed to ascertain its inner workings as they are not the same. The final analysis however must wait for the next text, ChFANO/1, which indicates that the chart is a pastiche of several charts and was probably started in Lisbon and finished in Italy. 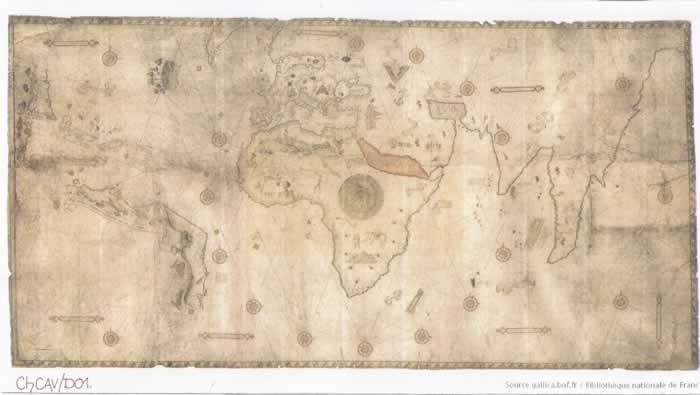 Henricus Martellus 1491 and Martin Waldseemuller 1507 charts both exhibit a peculiarity in the draughtsmanship design of the African Continent. Thus it appears they were both confused by a similar presentation of a plain rectilinear chart they were using to draw their curvilinear world maps or charts. The reason for the confusion is amply illustrated by the King-Hamy 1502 chart which has two Equatorial lines; one for the western geographical section and one for the eastern Ptolemaic section, but they are shown as overlapping within the African Continent.
Also to be addressed is the confusion with the nomenclature researchers have used to describe the form of these charts. They are not cordiform or Pseudo-Cordiform but plain Ptolemaic projections as can be amply illustrated. The Martellus 1489 printed charts are nothing more than an inverted Ptolemaic First Projection and then the 1491 chart and the M.Waldseemuller 1507 chart are just a slightly modified Projection Two by Ptolemy.
Thus this text commences with the Geographike Hyphegesis of Claudius Ptolemy, explores the King-Hamy 1502 chart (D01), then an analysis of the Martellus 1489 printed charts (D02) and finally the Martellus 1491 chart (D03 & D04) and the Waldseemuller 1507 chart (D05). For all of these answers are given to the questions regarding draughting methods, construction and their presentation, including their errors and foibles. 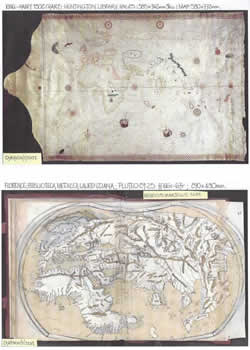 The atlas dated 1511 was obviously drawn in 1510 and contains a very mixed bag of charts. They are all investigated, but the sheet numbered 08658-001 by the JCB Library, the so called Dedication page, is investigated separately as a stand-alone section text, ChAVM/2.
The atlas comprising 10 sheets was composed with several scales being utilised for the various charts. These do not at first appear to be interlinked as the atlas has obviously been re-configured in the distant past, a fact borne out by the attempts at alteration on a chart. Therefore not being as originally composed I have suggested the original order of the charts which make logical use of them as their scale bars indicate. Vesconte Maggiolo has included his version of the first projection of Claudius Ptolemy using an amalgam of old and new charts as many other cartographers of the age have. There is also a cosmography which in fact is rather redundant as a useful tool. As I surmised in my text ChGEN/1, the whole atlas required to be drawn from a complete Portolan Chart and it appears in the investigation.