Many papers, subject matter cartography, and more particularly those concerning the methodology of Claudius Ptolemy now include the “de rigueur” utilisation of computer programmes, computer generated visualisations and the Star Burst Plots which endeavour to illustrate data comparisons. That this usage of the computer does not of itself appear to offer any additional information to the subject matter and is merely presentational, should perhaps give cause for reconsideration by those authors of its usage.
This paper is not a polemic against the use of computer generated data, which certainly has its place when appropriately used. It is in fact questioning the over complication caused by such usage when simple maps or diagram maps used as the prime research tool would actually explain more.
This paper illustrates that by comparing maps based upon the same projection, and with the use of only simple maps (for that is all that Claudius Ptolemy has bequeathed to us) a fuller understanding of “Geographia” can be gained.

Having been tasked by Julius Caesar to map the known or Roman world, and seeing the resulting map displayed in Rome, it was perhaps quite certain that following emperors would wish to add their conquests to that map. To achieve that Britannia had to be surveyed. 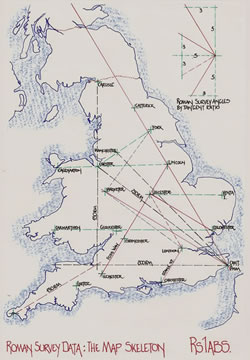 The text by R J Pujades i Bataller referring to the winds and technical items within Les Cartes Portolanes is contained within pages 473-481 and 513-514. Here-in R J Pujades sets down his research and reasoning for the origination of the physical work entailed in producing a Portolan chart, the process of copying and the possible scales used as a reason for the charts observed sizes. He clearly focuses upon the wind diagrams and its draughtsmanship, but, it can be clearly shown that his reasoning is based upon a false premise. The background graticule can be shown to be the arbiter of the Portolan chart with the copying method to obtain a number of similar charts merely the use of templates. The background graticule assists in the primary positioning of the map, and certainly provides the chart scale. 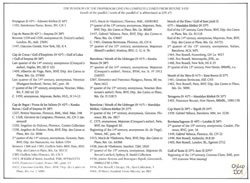 The 1403AD Portolan Chart of Francesco Beccari has been studied in a historical and a technical paper. Commented upon as unique for its latitudinal scale and what may be considered a rather self serving, apologetic text for past chart failures, it requires researching.
Ignoring the previous texts for the main analysis of the 1403AD chart, the actual evidence paints a different picture. Thus it is then possible to show by comparison to those texts the technical detail that should have been assessed and thus a more correct conclusion arrived at.
Finally, the 1435AD Portolan Chart of Battista Beccari is also analysed with the obvious necessity of a comparison to the 1403AD Portolan Chart. 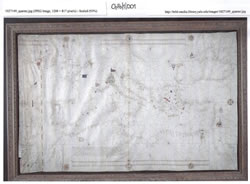 The wind rose graticule has been shown to be a simple geometric construct based upon the side length ratios of a triangle for angular deviation. The ratio of the squares when drawn is 35: 30: 20: 7 TRU’s (trignometrical ratio units). But what if the charts size and chosen scale does not allow for an easy conversion of the ratio numbers to scale measures? This text is an appendix for the original ChWr/1; Wind Rose Construction text.

Having studied a large number of Portolan charts, as the website clearly shows, I was struck by the lack of examination of extant Atlases in the research texts of others. Those Atlases are detailed in Les Cartes Portolanes, pages 69/70, and having just reviewed my research into the work of Petrus Vesconte (ChPV/1) and revisited his Atlases, I decided to review my research including those Atlases and others, not all of them, just the first 14.
However, I did not consider that a short text could contain a complete review of those chosen as I had carried out on the Petrus Vesconte 1313 and 1318 Atlases, but instead concentrated upon the Atlas page containing the Iberian Peninsula, the starting point for the utter confusion which can be shown to exist apropos distance measures and thus the original distortion point for Portolan charts.
As there is generally only one scale bar to each Atlas page, it is thus a simple matter to ascertain the accuracy and measures utilized to draw each sheet. Thus, when a confusion of distance measures is encountered on this one Atlas Page, emanating from a single scale bar, little more than those facts require to be investigated. It also determined that the draughtsmen were not au fait with their subject matter and thus should be considered only copy artist’s, but from what? That does not infer criticism of the artistry to produce these Atlases as they are a feast for the eyes, and illustrate exquisite draughtsmanship but a lack of real knowledge, and confirms they are copies, not original works. How many originals were copied is detailed. 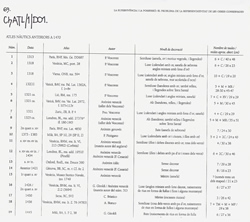 The text is in two distinct sections; firstly an analysis of the chart dated 1500 noted as being by Juan de La Cosa to understand how it was drawn, the measurements used and the probable origination of the data used; and secondly an analysis of the “raw” historical data regarding the “La Cosa” personage and his exploits after stripping out the hyperbole and extravagant overstatements of many authors who have written concerning the whole subject of the exploration of the West Indies.
Both sections are written as stand-alone texts and need not be read as one paper.
This section casts doubt upon the authorship of the Chart and perhaps the date appended, as it appears to have information that was only known after the 1500 date and is thus thought to be 1502 at the earliest as others have suggested, but in fact could be even later. This section also questions the charts origination. The second section is merely the historical facts that can actually be accepted as such. But, as only confirmed fact should be used before accepting circumstantial evidence, and there being little definitive data to go on, speculative texts abound and they must be challenged. Both sections have their own Abstract/Introduction and they are not cross referenced to each other to allow the reader to reach his or her own conclusions from the evidence presented.

Having read many texts concerning the Columbus exploits and thus knowing of Juan de La Cosa from those texts and his c1500 chart, I was totally bemused by the chauvinistic approach of many authors and how in each text new titles appeared when the historical facts did not actually agree. It appeared to me to be a little massaging and improving the data.
Thus I decided, but against my better judgement and contrary to my normal approach of analysing charts and maps, to explore at the most basic level the history appertaining to Juan de La Cosa. As has been stated by others, there is little hard evidence (or none in reality) regarding him prior to 1492. Even where he was born, his home village has been guessed by some when it is clearly written in a ships listing, but to establish the credentials of the c1500 chart the investigation is necessary.
In the first section I analysed the chart by draughtsmanship detail and now the second part is an analysis from confirmed facts with a timeline to establish the whereabouts of and the survey work Juan de La Cosa could have carried out.
Please note that to simplify references I am giving only page numbers from “Christopher Columbus, An Encyclopaedia”, edited by Silvio A Bedini, which was originally published in two volumes in 1992, but re-issued in 1998 as a single volume which is here-in used. I have and have also read numerous other texts and find that the basic facts remain the same throughout with some “gilding the lily” regarding the situation and others stretching facts to breaking point; one is enough!

Read research papers or books concerning Genoese 14th to 16th Century cartography and there is not one text written which investigates how it all happened and uses simple basic facts such as lifespan, training or raison d’être for the origination. The first extant work provable by attribution is that of Petrus Vesconte and his 1311 chart. But he had to be taught the art and that has never been addressed in the myriad of papers written over the last years. Add to that the Carta Pisane, probably 1290 and the Cortona Chart c1300, both of which have doubtful provenance, but by existing they push the date backwards for the training of their authors. Thus this text sets down clearly known facts and dates and uses the life spans attributable to evaluate the overlap of these cartographers and how their charts also spring from a basic pattern/template which is amply illustrated in the second part of this research.

The text is 20 A4 pages and contains 53 A4 Diagrams (originals are all A3, and some interlink to form the complete chart at large scale.)

Searching for information regarding a Globe which I thought had dubious attestation given by J L Stevenson, Tome 2 pp47/49, regarding Petrus Plancius, I was led to the BnF Paris and a set of Gores available under their Gallica system. To my surprise I found them to be wrongly drawn and did not include the three texts quoted by Stevenson. Hence a very fast research project to find the globe ensued whilst I awaited a Portolan Chart scan to arrive.
The outcome of this research is quite surprising to say the least! And, it is merely a quick resume of the facts I have so far discerned requiring a proper research project later.

The appendix is perhaps the most surprising find, geometric errors by Mercator! 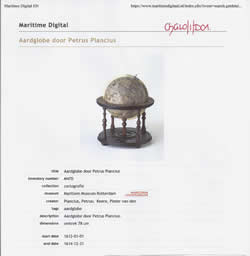 A historical and technical examination of the sinister and dextra parts of the Dedication page, JCB 08658-001, illustrating the Armorials of the titular heads of Corsica on the sinister and a map of Corsica with toponyms and four elaborate monograms on the dextra. It is not a definitive work as it must be further investigated due to the complexity of the subject and a distinct lack of detailed information. Speculative in part it certainly is!

The basic facts are laid down with conclusions where possible regarding the Armorials, but the Map of Corsica and its toponyms is analysed completely and there only exist one or two curious place names that are unknown today. However in comparing this map to others it proves there are always curiosities.

There is also an appendix which discusses the cartographers in Naples c1510. 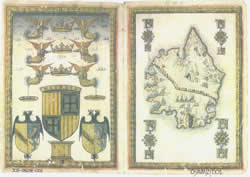 Having investigated the JCB held atlas of 1511 to evaluate its geography in text ChAVM/1 and ChAVM/2, this text adds the geographical information from the 1512 atlas held in Parma and the 1519 atlas held in Munich. All three are compared to each other to establish the continuity of their construction.

Thus it is possible to opine that Vesconte Maggiolo had with him on his 1508/1509 journey from Genoa to Naples a Portolan Chart and in all probability a pattern/template with which to construct these atlas pages. They are quite accurate in their comparative state when the scale bars are aligned and they are overlaid one on the other as the diagrams clearly illustrate.

However, this text commences with Section 1 a retrospective analysis of the 1511 JCB atlas page sizes to determine how Vesconte Maggiolo actually scaled certain sheets to fit precisely to the page size of c39 x c57.6 cms. This investigation proves the use of the Roman Uncia for some of the charts construction and also that the charts are in a mathematical ratio of size with a rather extraordinary finale.

Section 2 is then the comparison of the three atlas and their inner workings and illustrates the previous findings of continuity of pattern/template.

Section 3 is a comparison of V. Maggiolo and Salvat de Pilestrina’s work which shows they are probably identical and thus from the same pattern/template drawn in Genoa. 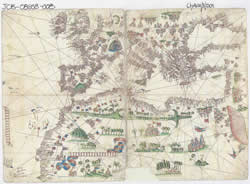