The normal interpretation of “De Vita Agricolae” written by “Cornelli Taciti”, the history of the Roman conquest of Britannia, is that after subduing the south and midlands, the land either side of the Pennine Chain was to be subdued by a two prong assault from Chester and York. This two fold assault required cross Pennine contact via valleys and passes and required that forts be strategically and locally positioned. The positioning of these forts illustrates Roman Military survey skills which have not been explained in extant literature.
This paper illustrates the survey and planning by the Roman Army in the landscape of Britannia indicates that a large amount of data is missing from extant histories.
It also illustrates that the Roman Army had and made excellent maps. 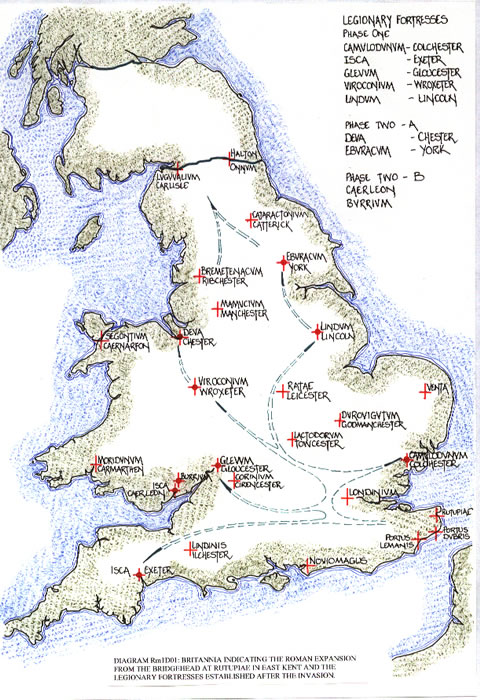 The Roman method of aiding retired legionaries was to set up a “Colonia” or just a Civitas and auction by lot land parcels for self sufficiency. These land areas formed a territory and it is possible to establish their boundaries by landscape archaeology, through extant boundaries and constructions. This paper looks at two such areas which form part of the Foss Way, England; a well known Roman Road. 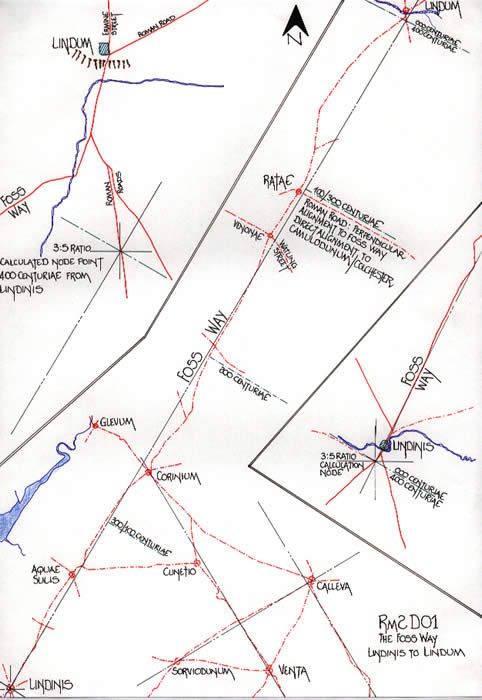 The Groma is a surveying instrument utilized by the Roman Agrimensors or Geometres to align the boundaries of fields and general areas. It was used to set out the original land divisions as well as check their veracity after years of farming and thus to resolve land boundary disputes. It is well documented, but hard to establish in practice as a physical object. Thus the papers so far written are perhaps lacking in practical assessment of its utilisation in the field. This paper analyses the evidence by practical application, and assesses the likely construction. 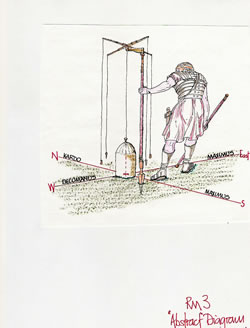 The texts concerning the work and methodology of the Roman Agrimensors or Geometres are contained in a variety of extant manuscripts which have been well studied. However, when one these manuscripts is analysed with a practical surveyors appreciation of the finer points of field work, it does not stand up to scrutiny. This paper endeavors to unravel the mystic from the practical and cast light upon the actual practical works of those Agrimensors.

The text is 6 A4 pages and there are 16 diagrams, some of which are full colour. 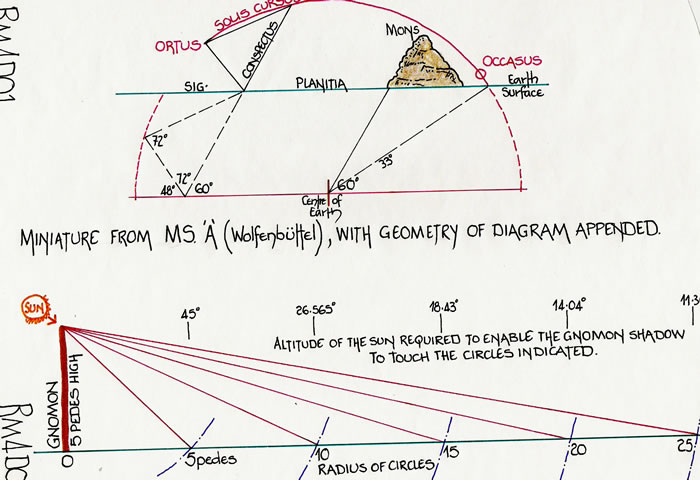 Codex Arcerianus ‘A’ contains many Latin texts and particularly works by Hyginus Gromaticus. One would perhaps assume that with a surname taken from the Roman surveyor’s instrument, “The Groma”, any text written by him concerning survey techniques would be correct and to the point.
I have already shown (in text Rm4) that is not what we find when reading these texts. It would appear he was more a mathematician and geometrician than a surveyor, and wrote accordingly.
This text (part A) concerns the technique of establishing N S E &W using a gnomon and three shadow lines from the Sun’s rays. It is a mixture of practical work, knocking in a post or gnomon, and drawing work. As such, it would be extremely difficult to combine and carry out in the field.
Thus we see a theoretical concept transformed into a supposed practical concept, and failing. When in the field surveying alignments for a new Territorium or similar, it is best to keep all techniques as simple as possible, using the minimum of equipment.
The second part of the text (part B) examines the actual physical process of surveying the main points, Decumanus and Kardo Maximus, and discusses the knowledge required by an Agrimensor.

The text is 7 A4 pages and there are 14 diagrams, some of which are full colour. The paper is presented with the diagrams within the text for easier comprehension of the survey technique involved. 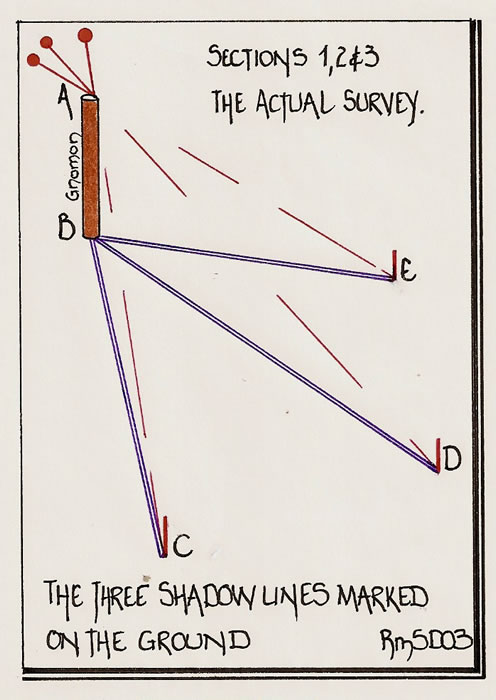 Within the 10 books comprising ‘De Architectura’, Vitruvius discusses the many and varied subjects which comprise the genre of Architecture. However, it is not a complete text for the subject.
From his own words we know that he copied or at least based his work on the texts of the authors listed in Book 7, chapter 7. Thus the simplest comment to be made is that he perhaps thought he was compiling an encyclopaedia of Roman design and building techniques. But that is not the resulting book.
That Vitruvius does not fully understand what he is writing or copying is amply illustrated in this text whilst sampling the data provided. I also endeavour to understand why, when writing such a treatise dedicated to Octavian/Augustus Caesar he is so parsimonious in his words, and why it takes until Book 6 for Vitruvius, writing about Architecture, to explain in a rather round-about way that his education included art and physics. If you are trying to influence or convince an emperor of your credentials, do it on page one, not after he has had to read 5 Books to find out if the author, (even though that author professes the he is known to Caesar), has the credentials to write the text. Therefore it is quite in order to ask why, and look at all of the other missing data, so carefully avoided.
This text does not analyse Book 5, Public Buildings, which is the subject of a third text referenced RmVt3. A short text reference RmVt2 discusses the Measure of Man, from Book 3, chapter 1.

The text is 26 A4 pages and there are 44 diagrams, some of which are full colour. 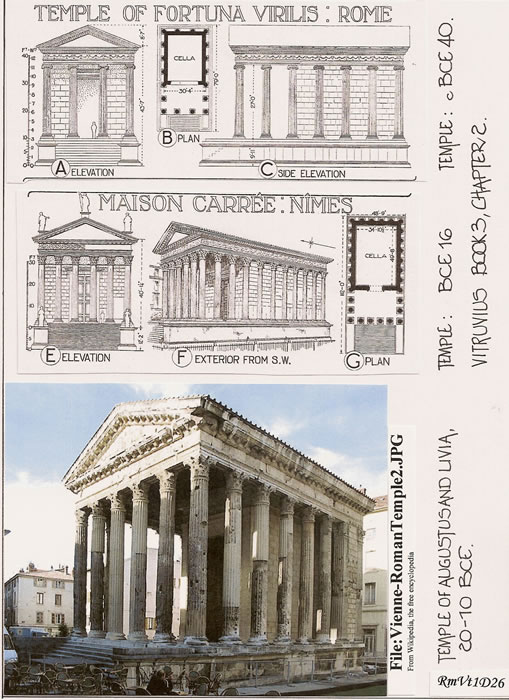 Vitruvius in his 10 books of architectural theory chooses to open Book 3 with a comparison of the design of Temples and the Human form. Within paragraphs 2 and 3 of Chapter 1, Vitruvius lists various dimensions for the human body and describes how the form can be encapsulated in both a square and a circle, which are two separate entities.
Leonardo Da Vinci cleverly incorporates the two entities as described by Vitruvius into one iconic diagram, Vitruvian Man.
Leonardo’s short text accompanying his diagram details the assumptions and lists the measures he has used. These differ from those of Vitruvius.
Both sets of diagrams require geometry to explain their raison d’être.

The text is 4 A4 pages and there are 5 diagrams, some of which are full colour. 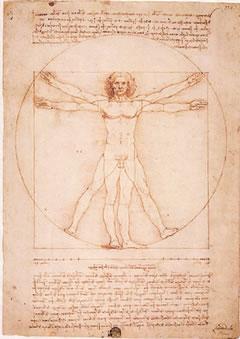 In text RmVt1 the general text of Vitruvius was discussed, who was he, his career etc., and it analysed various parts of the technical text of DE ARCHITECTURA.
This text is solely concerned with his description of the Basilica at Fanum Fortunae, its situation and design, as can be analysed from the text.
Necessary for this investigation is a historical time line for Fanum Fortunae, in the broadest of terms only.
The design of the Basilica is then diagrammatically illustrated to include all of the elements that Vitruvius details. However it is not an attempt to finalize a design. It is merely a guide, as the various translations from the original text of Vitruvius and his archaic technical Latin, when read in the English language, are so very different in their content and meaning. 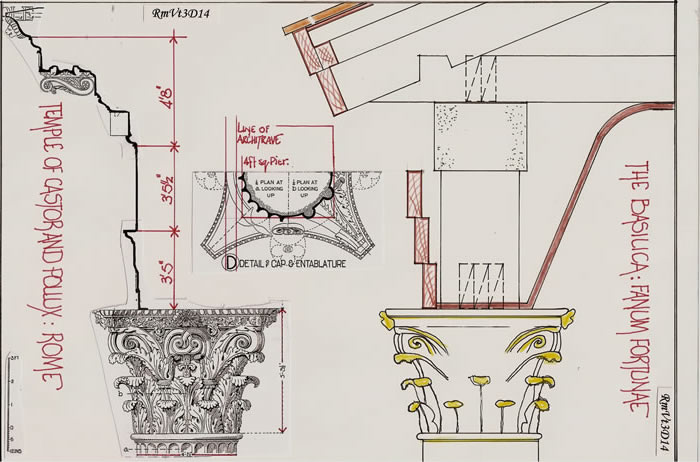 From the centuries BCE, Cosmographers, Geometres and historical authors bequeathed to us a variety of facts appertaining to their known world, the oikoumene. Most of the measurements were obtained by the traditional methods, “day’s travel” or “day’s sailing”. There existed though trained surveyors, “Bematists” who by accurate pacing measured progress and “Cord Stretchers”, whereby precise measures were obtained.
Herodotus tells of expeditions and maps extant in the 7th to 5th centuries BCE, and Hecataeus of Miletus, C550-476BCE, was able to write his books entitled “Ges Periodos”, “travels around the earth”, as a Periplus.
Various other Cosmographers, Geometres and historical authors added their own text, or recycled previous author’s work, to add to the corpus of information accumulating. This was mainly gathered at Alexandria after the formation of the Ptolemaic Dynasty in Egypt.
The collation of many facts led to perhaps the first of the scientific world measures, that of Eratosthenes, with his famous method and cosmography.
Then Rome became the all powerful state, absorbing Greek “Gnous”, and by 60 BCE dominated the Mediterranean lands. Julius Caesar then consolidated the Roman Empire.
But that Empire was perhaps intangible to many Romans, being only names on parchment. Thus Julius Caesar instructed a formal World Survey, choosing four Greek Geometres for the task and gave each a cardinal segment. But, having given those instructions he was infamously slain in 44BCE, and his adopted son, now Augustus Caesar, completed the task and by 6BCE a map was displayed in Rome.
Then soon after the commencement of our common era, Strabo, c15CE, wrote his “Geography”, based upon the work of Eratosthenes, but added his own travels and observations. Pliny the Elder, c75CE, wrote his “Natural History”, which was based upon the Roman Survey and its aftermath, and in c100CE, Marinus the Tyrian wrote his “Geography”. That text is the basis of the work by Claudius Ptolemy, his “Geographike Hyphegesis”, c150CE, the only extant cosmography now available from that period and used by most cartographic historians.
Then slowly but surely a new and possibly intellectual sect appears, Christians. The Roman Empire wains and is defeated by Odoacer in 476CE, but by 391CE Rome had already accepted Christianity as the state religion. Thus we can observe one state ruled by a Caesar being supplanted by a nebulous state, but ruled by a Pope and taking on the trappings of Roman technology, using their survey methods by studying the texts of the Agrimensores and Geometres. Later the formalisation of Monastic establishments into one design followed the Roman Army principle of identical layouts, such that peripatetic soldiers and the monks could locate their place easily in a new establishment.
Thus the Roman World Survey which had gathered in extant knowledge, then amplified it with new research, enabled following generations to progress both with formal surveying and cartographically. 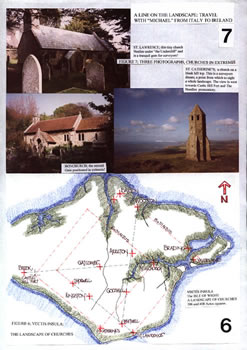