This is the second chart fragment discovered in the Notarial Archives by the conservation team led by Joan Abela and carried out by Theresa Zammit Lupi with the assistance if Chanelle Briffa, and many others. It is their dedication which has enabled the first fragment to be identified as by Domenico Vigliarolo (see ChDV/1) and enabled my investigation not only of that fragment but this second and latest fragment. 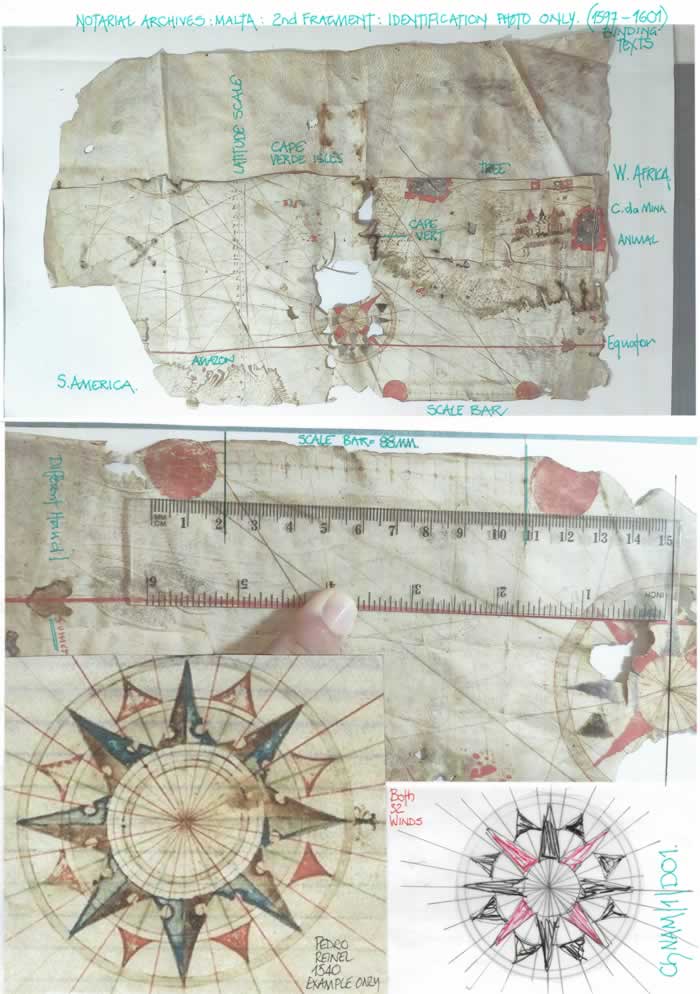 It commenced with the team in Malta sending me over 30 detailed photographs, ever so very necessary as the state of preservation following the binding was poor. Finally I had a photograph of the preserved fragment, sans wrinkles and capable of being analysed. Thus I could read some toponyms and begin to understand the fragment.

It was fortunate that the scale bar existed in the “South Atlantic” and a latitudinal scale bar possibly denoting the Line of Demarcation between Portugal and Spain from 7S to 21N, was available to be used in the research.

The fragment is to put it plainly a very poorly drawn example of a Portolan Chart with the toponyms written by a heavy hand and poor script. There are three vignettes on this fragment; a Tree, an Animal (!) and the Castello da Mina, which today is in Ghana. The Animal is quite bizarre and shows that the cartographer was unskilled in this form of art and was probably guessing what had been described to him by others. The Tree is a Palm and features on other charts as will be indicated and the Castello da Mina is a mainstay of these charts which feature Portuguese West Africa. Unfortunately the decision to cut the chart for binding purposes has lost the map of South America as well as the West Indies and Gulf of Mexico.

The coastlines on the fragment appear to be outlined and then a separate strengthening colour applied, (a common feature), but it has served to ensure that the coast of West Africa is very awkward to follow, unlike the coast of South America which is cleaner. However the blotchiness of the coast drawing is similar to the blotchiness of the writing for the toponyms indicating a hand not used to wielding a quill pen.

THE TOPONYMS
In an endeavour to read and understand the writing and thus list the toponyms I utilised another chart drawn in c1546 by Joao Friere, a Portuguese cartographer and it is here-in shown as Diagram ChNAM/1/D02. Fortunately this chart (an Atlas page) also included a Palm Tree, the Castello da Mina and a Lion atop a rock, which clearly illustrates mid 16th century decoration. The fragment toponyms are clearly very poorly written and decipherment is not helped by the faded ink. Thus to combat this I resorted to an Ultra Violet light to enhance the enlarged photographs, as illustrated here-in, and although I can read many single words here and there I have not been able to identify the actual places named through comparisons with other charts as the words are so faint and in-decipherable.

In fact I have the distinct impression that they are transcribed toponyms via Phonetics. 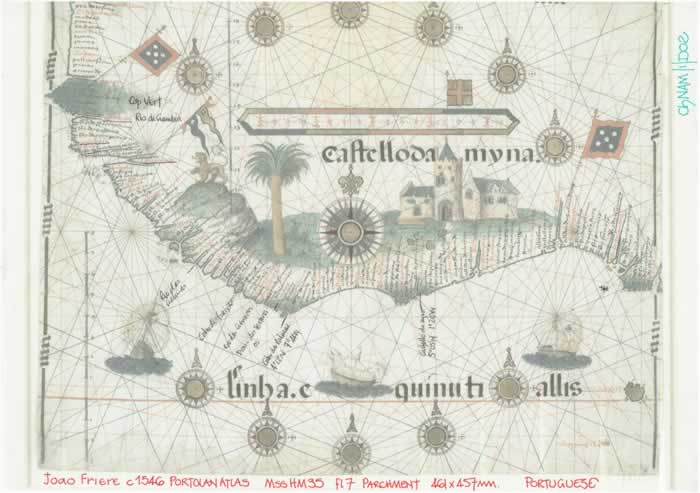 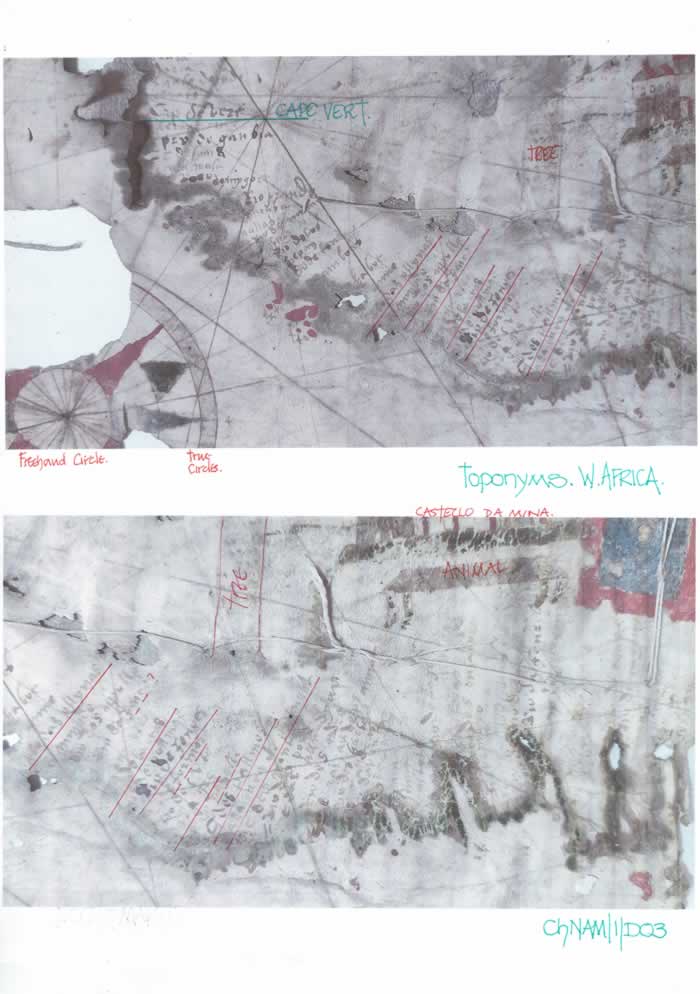 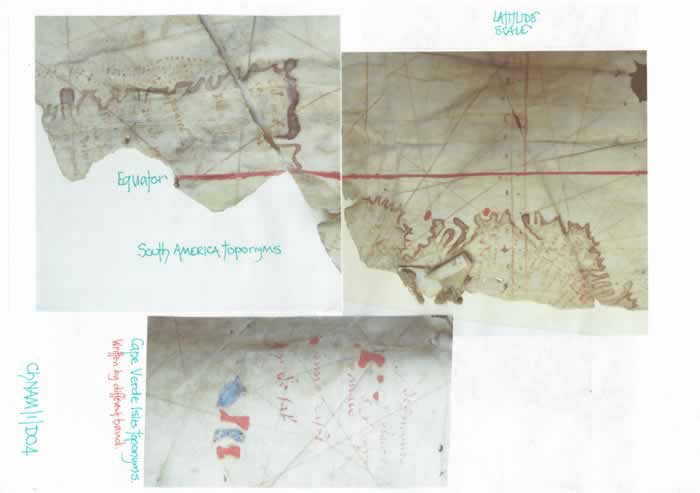 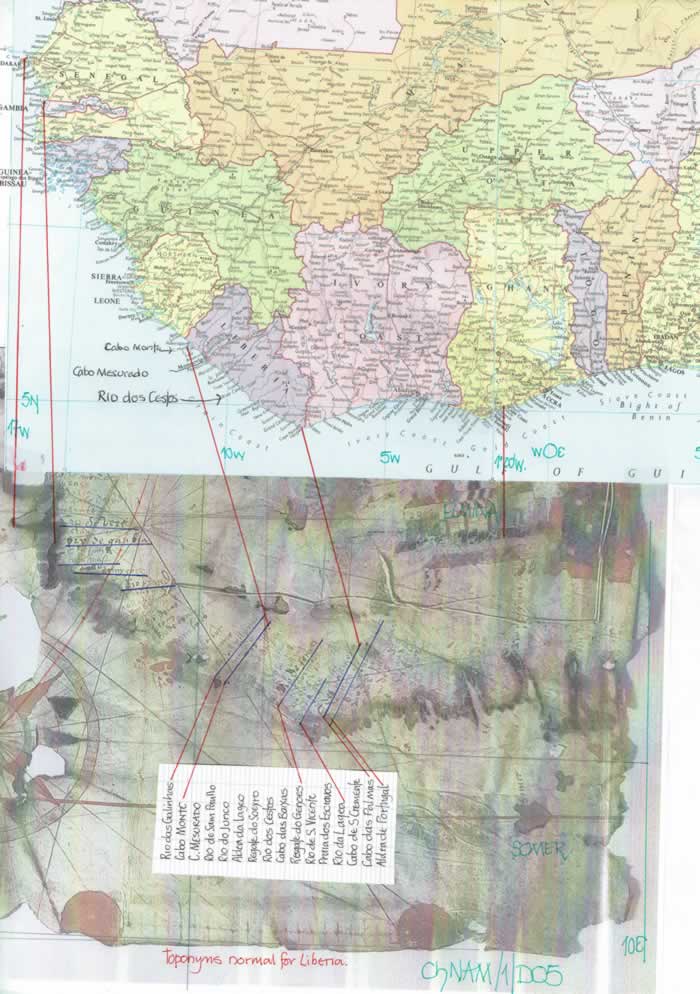 COMPARISON TO A GEOGRAPHICAL CHART, LATITUDES AND LONGITUDES

The West coast of Africa at 17W and 15N is defined by Cape Vert and hence in the Atlantic the Cape Verde Islands. These feature on this fragment and are thus landmarks which can be used to gauge the charts distance measures. Firstly the latitudinal scale bar was measured against the scale bar and each degree of latitude is 75 Sbu’s. As stated the existing latitude scale bar is from 7S to 21N and thus I could expand it both North and South to estimate later the full extent of the original chart. The Equator is correctly positioned apropos the southern coast of West Africa, the Bight of Benin and thus that coastline is correct at 5N. Cape Vert is set at c15N correctly and this was a bonus. The 75 Sbu’s are in fact the standard latitudinal measurement used on Portolan Charts and emanates from the misunderstanding of the measurement for the West coast of Iberia which extends from 37N to 43N, where the figures were mixed up and the 75 actually refers to 75 Roman Miles, the correct measurement for a degree of latitude but it was drawn as 75 Miliaria instead of the correct translation of 90 Miliaria per degree. This caused the twist in the Portolan Charts setting out of the Mediterranean Sea.

The next positional item is “SOMER” an island which sits on the Equator and is in fact SAO TOME (St Thomas) which indicates that the three islands are geographical in the Bight of Bonny and thus the coastline to their East, just visible on the fragment is in fact set at c10E. Thus from Cape Vert 17W/15N to this 10E position provided me with 27 degrees longitude and a scale bar measurement of c2400 Sbu’s. This equates to 89 Sbu’s per degree of longitude. But as a degree of Latitude and longitude in the medieval period at the Equator were equal, I concluded that in fact it is meant to be 90 Miliaria per longitudinal degree, ie 2430 Sbu’s and thus the 75 Sbu’s latitude was the standard error.

It also leads to the conclusion that this is a basic square chart as are so many in the 16th century starting with the Padron Real of Spain.

Having assessed all of these items I decided I could recreate the possible chart using lines from the fragment to position the wind rose and thus the geographical concept.

THE PUTATIVE RECONSTRUCTION OF THE FRAGMENT TO A CHART

I commenced by determining the position of the Centre of the Wind Rose using the partial Roundel to plot its centre. I then extended the wind rose lines that were visible on the fragment to confirm this point and draw a putative circle to the existing Wind Rose roundel in the south east. Thus I also had the latitudinal and longitudinal centre lines of the construct. I then extended as many lines as possible to identify the eight compass points and immediately found a dichotomy in the answer.
The scalar draughtsmanship was as bad as the coastal and toponyms writing and in fact as I have indicated two circles are found. But, what resulted was the fact that the larger circle hid the distinct possibility that the cartographer had not used the standard 35/30/20/7 proportions in a quadrant but just divided the quadrant by three as each quadrant was 35 degrees latitude and thus 3 x 11.667 degrees.

The wind rose lines although not drawn accurately to the standard 22 ½, 45 and 67 ½ degrees were in fact drawn to emulate both possibilities, perhaps because the cartographer did not fully understand the mathematical logic of the 35/30/20/7 proportions. 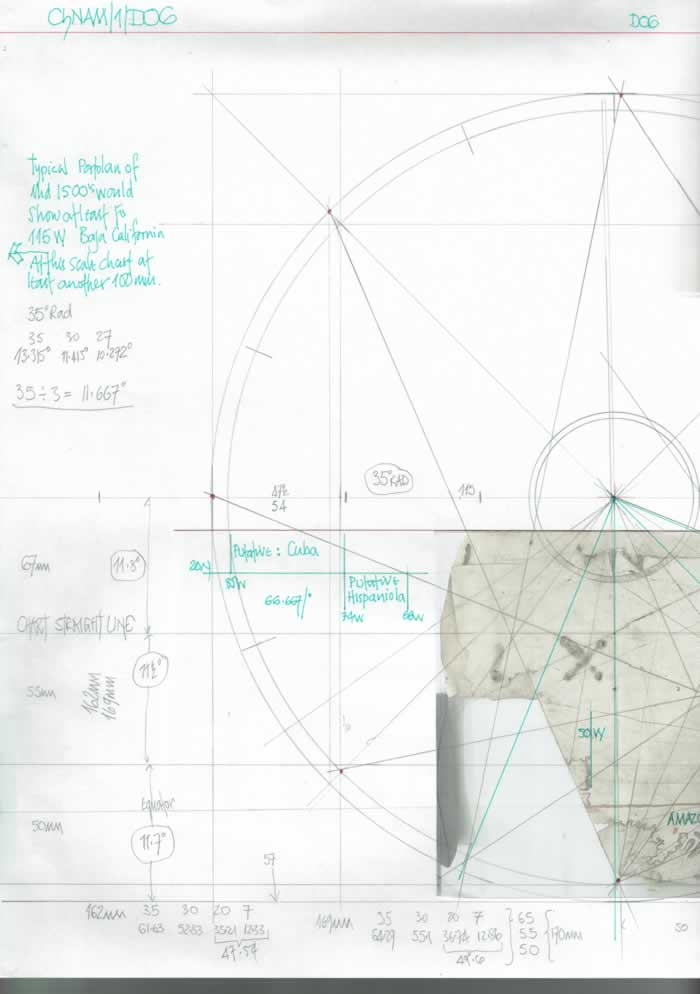 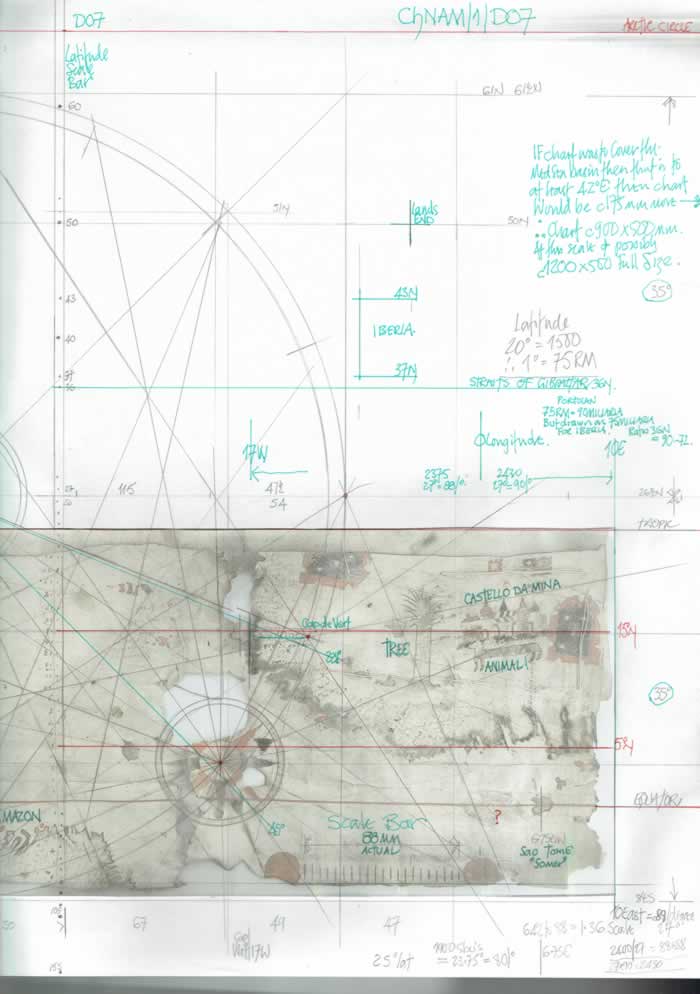 But, I had to use that which I found and proceeded to position the major alignments from the West coast of Europe and in the West Indies. From this I assessed that the chart could have shown from the East, The Black Sea and extended westwards to cover the Atlantic and the Gulf of Mexico and thence west to Baja California and therefore have been a standard Portolan Chart some 1200 x 500mm. Which means it could have shown Nova Scotia/Newfoundland/Labrador in the north and to the south at latest to 15S on the east coast of S America. But it is a putative idea and given the poor draughtsmanship perhaps too much.

WHO IS THE CARTOGRAPHER AND WHAT IS THE CHART’S DATE

That remains a mystery, but I certainly believe he was totally inexperienced and that there are definitely two hands on the chart.

The latitude numbers are well scripted and most of the wind rose lines finely drawn. The scale bar is neatly drawn but the roundels are poorly executed and show in the centre that in fact the wind rose has all 32 points, but not all lines are visible. That fact hampered the investigation as had they all been visible then perhaps greater accuracy may have been achieved in the investigation, even though they are not accurately drawn to angles.

However the script of the toponyms also changes as generally it is very poor, splotchy and as I have surmised the person writing them is not adept with a quill pen. However study the script for the Cape Verde Islands and the latitude numbers, probably by the same hand, but most definitely a different hand and a cultured one.

Thus I conclude it is the work of two people, one highly trained and the other, who could well have been trained but from the hand I would say was quite aged and no longer adept, but determined to carry on. He could also have been a Sea Captain, & it’s his chart.

The date of the chart is a matter of pure guess work as it could be from a period stretching from 1530 to 1570, and many such charts were drawn then. Knowing that the Notarial papers were bound after their use, they are dated 1597-1601 was in fact no help as we do not know when they were actually archived. The original chart fragment is found binding Notarial Papers from 1670-1671 and that chart can be fairly dated to the 1570’s.

I was rather disappointed that there was no conclusion to this investigation, particularly as I sensed that the two cartographers were poles apart, but there was just not enough good script to enable a search of charts and thus perhaps in the future another researcher may notice a similarity of script on a known chart, and one part of this quest would be solved.