Identified were multiple rings and a complex constructional layout of pits and Post holes as well as a Henge. The largest circle is c115m wide and the central space is c47m wide. A Palisade confined the interior two rings and then outside are the Henge Ditch, then a broken ditch and finally an outer ring of posts defining the whole space.

But one comment surprised me; “The precision of the monuments layout illuminates the building process. The Ring Ditch is the most geometrically accurate of all the circles; the accuracy of the other rings decreases slightly towards both the interior and the exterior” Figure2 and Table 1, which I have included as part of the diagram.

When studying Table 1, Geometry of the Pommelte individual Rings, I was struck by the differences in the Maximum and Minimum distance to the Rings Centre, which I must add is at no time located or shown and thus I assume it is a mathematical construct from averages. The distances are; 4.16; 3.12; 2.33; 2.64; 2.07 and 3.88 metres. These are by no means accurate as the expectance would be that the central point was identified for the construction and pegged so that circles could be scribed on the earth using a rope and pointer. 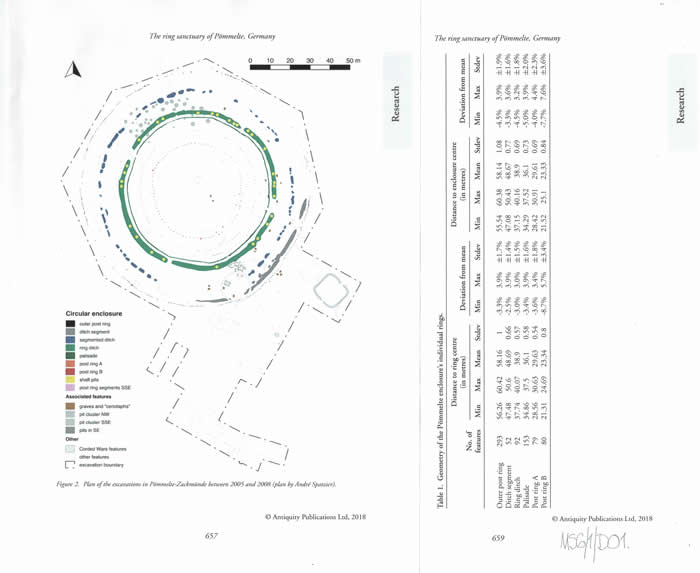 But the Authors state, “In summary, a general building sequence can be suggested for the Pommelte monument. The first phase involved defining the enclosures centre and marking out the Ring ditch, the latter serving as a reference for subsequent construction. The outer and two inner post rings were probably constructed first.”

Thus if the Ring Ditch (Henge) was first then it should be “perfect” and the Palisade along with the two inner rings very simple to set out as there would have been no impediment to scribing the circles. But, these have very marked in-accuracies as will be shown.

Thus it is perfectly feasible to expect that the outer segmented ditch section and the outer post ring would be the most difficult to scribe from the centre given the four constructs.

I therefore was uncertain about the construction phasing, certainly did not consider the Rings accurate and decided that the only method of determining the actuality of the circles was to construct their circumferences and thus the whole cite centre.

Firstly, I enlarged the Figure 2 such that I had a workable scale from the appended scale bar to 4mm equalling 1 metre. Then the layout was examined for a putative geometrical layout or construct and thus everything that follows is predicated upon just how accurate the survey plot I am using actually is. (It actually proves to be surprisingly accurate.) 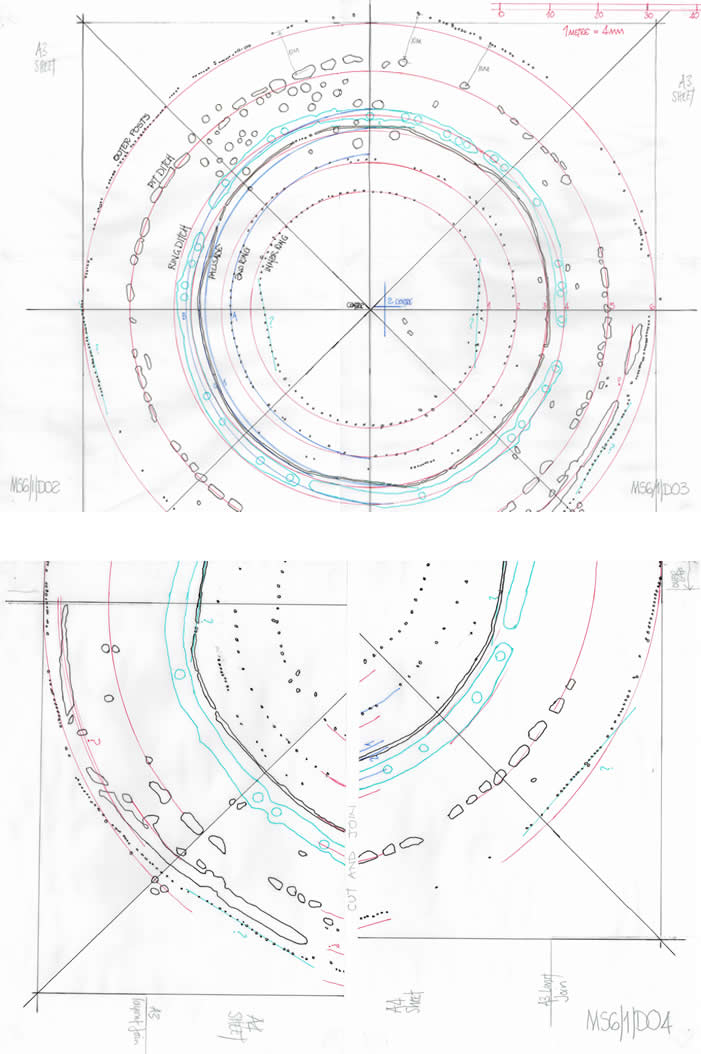 The most noticeable features are clearly visible before any attempt at drawing is made and are that on the western side of the first four rings, they are the Inner Ring, The second ring, The Palisade and The Ring Ditch, all out of shape in the fact that their circles are deformed towards the centre; that is they are differently drawn from the residue of the ring. The Inner Ring also appears to have a straight section of posts in the western section and the possibility of a similar section in the east. Thus I was doubtful that this was “Survey” set out by a rope and pointer from a known centre. These were visual findings to commence with.

Thus the primary concern was finding enough posts which could be recognised as being on a circumference to attempt geometrically to find the centre point. That investigation was actually quite simple using the inner Rings and was confirmed by the drawing of a putative circle for each of the six features as the diagrams will indicate. This also confirmed that the visual inspection which showed a bias in the west as described was correct and required a separate analysis.

Please note that Diagrams MS6/1/D02, D03 and D04 will join to produce a plot at the same size as my diagram if printed at A3 and the D04 is cut and joined separately to form the lowest part of the plot. Note there is plenty of overlap on the sheets.

Having established a credible centre point and drawn the circles that were a best fit to the construction I was able to measure and compare them to the Survey Yard of 4.714 feet and the Megalithic Yard of 2.722 feet, those being the units of measurement I knew were used in the UK and Scandinavia in the period of the construction of Pommelte.

Tabulation of the ring measurements;

But of course what this plot clearly indicated was a different curve to the features 1 to 4 in the west and a new centre point (Blue) was established and the measurements of the Radii taken.

If the geometry of the Authors is analysed against my putative radii we have the following;

Thus the distance measure to my putative centre point gives a close correlation between the Authors figures and then following they included a table of the centre point;

Please note that the difference between the two putative centres is 3m east and 0.5m north of the main centre point for the Blue centre.

The outer ring is the hardest to analyse as it has many sub-sections which could be given separate radii and perhaps this indicates that it was not actually surveyed from the centre point but possible measured or estimated from the Ring Ditch or Pit Ditch construct. Some portions appear to be more straight alignments than curves.

Therefore the assumption overall that it could be a concentric construct is feasible but requires perhaps acknowledgement that there was an original survey error for the Rings and for some reason, perhaps just an error, the centre point was moved. However it also appears that the western section may be deliberate action following an original error in either setting out or digging the ring ditch and thus the Palisade, 2nd ring and inner ring had to follow the profile for continuity. If several teams were working at the same time and their competency was not equal then errors like this are inevitable.

The hardest task is to evaluate the inner circle and the 80 features noted by the original Authors. If it was set out properly then this Ring would have an equal number of Posts per quadrant, which the survey patently indicates is not the case.

But if a simple construct is required then the circumference of the Ring is the important measurement. It must be capable of being sub-divided by a known measurement which can be replicated continuously.

To illustrate the simple methodology required to determine a quantum from a circle I attach details of Sarn Y Bryn Caled where the whole system is based upon one measurement, the Unit Yard of 4.714 feet. It was found from the fact that the pit depth from the putative original ground surface was nearly exactly the same in each post pit. The pit depth was 4.714 feet, the unit which derives from the 30/60/90 triangle formed by the three measurements of 2.722/4.714/5.444feet and thus in the ratio of 1; root3; 2. The spacing of the posts was identified as 2 x 4.714 feet and given the fact that it is normal for a post to be buried 1/3rd depth then the height out of the ground was 2 x 4.714 feet and the resulting portal was an exact square for each section of the circle. 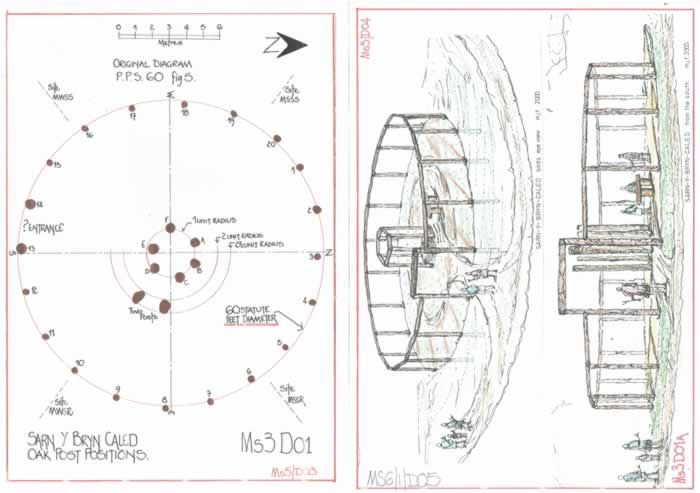 However if we divide 150.796 by 0.8296656 we have 181.755 or 182/2 = 91 posts spaced at 2 megalithic yards. The circle for 90 posts, a more logical number would be 149.34 metres, but a rather large 1.456 metres difference to the putative circle, and a radius of 23.768m, but nevertheless logical. The figures are too close to call mathematically to be happenstance and I suggest that the errors play a large part in spoiling the mathematics and a perfect survey result.

It is therefore quite plausible to assume that a circle of 300MY was required, which is 248.898 divided by PI = 79.2267 or 39.61 radius. That is a difference of 0.36 metres, but from my putative centre it takes the circle slightly outside the edge of the Ring Ditch as drawn by the Authors and as it is scaled to 4mm equals 1m, only a large scale plot or a ground survey will answer the question of the accuracy of the putative measure of 2.722 feet or 0.8296656m. I did wonder if the setting out was to the outer edge of the Ring Ditch which would preserve the marks as it is dug internally to them?

However there is one more possibility in the mathematics and that is that the ratio from inner circle to palisade to Pit Ditch is 24-36.25-48.375 could have been conceived of as a 1; 1/1/2; 2 ratio of radii?

The diagram illustrates the above text and endeavours to illustrate the close proximity of a putative design to the survey carried out by the Authors. It raises many questions which could be answered if the precision of the survey layout was quantified such that each ring would be capable of re-measurement for the features extant and the inevitable missing features from so long ago positioned for a full assessment of the MY Measurements. 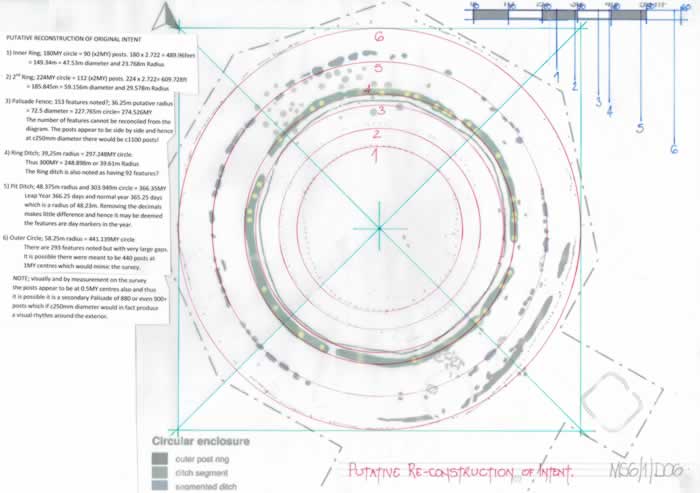 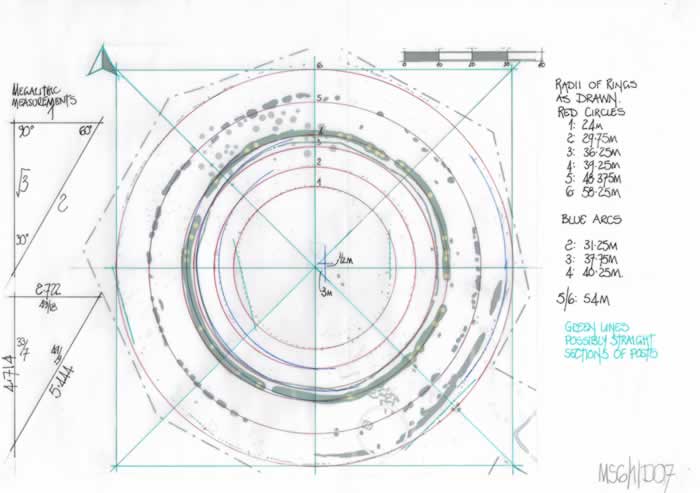 This final diagram is a simple reference to the foregoing text regarding the survey as drawn and contains the main research items to be considered.

What is written above is an attempt to evaluate quanta for the Pommelte Ring sanctuary. I know of no quanta for any German Megalithic Structure or site and have had to rely on the attested quanta from the UK and Scandinavia, as well as the Basque country where details have been published sufficient to allow for a detailed analysis.

My texts MS3 and MS5 set out the basic researches into these measurements and the other MS texts are complimentary regarding ancient mans measuring prowess and mathematical skills.

Should a scan of the survey layout, provided it was actually drawn to a large scale originally is available, or even the survey co-ordinates for each and every part and item tabulated and available it would be quite feasible to clarify the quanta and perhaps find a German unit of measurement!?