The atelier of Cresques Abraham (1325-1387) was undoubtedly a continuation of the atelier of Angelino Dulceto (!name!), who probably arrived in Majorca late 1320’s, having learnt his cartographic trade in Genoa. He was possibly still producing charts in the early 1340’s, as Chart C9 (London, Add.MS 25691) is dated to that period, although some scholars consider it may precede the 1325, C7 Chart. My ChCs/2 text also details this point as a possibility. However the change of date does not preclude the atelier continuing to the 1340’s and being the Cresque base, as the Cresque Chart is undoubtedly a copy of the Dulceto (!) charts. Therefore it is possible to opine that there is a linkage between the two ateliers.
The Cresques chart does however have two unusual features drawn thereon, one is quite unique, the second a copy feature, which are discussed in detail within this text analysis of the chart. It is then compared to the Dulceto (!) charts and other charts following the system developed for the ChCs/1 and ChCs/2 texts. 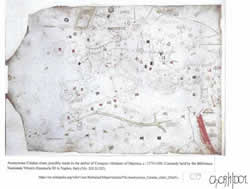 The Carta Pisane has been the subject of much speculation since it surfaced in Pisa. Is it the oldest known example of the genre of Portolan Charts, the dating is rather nebulous: was it drawn using the text of “Lo Conpasso De Navegare” (LCN): was it used at sea, thus its deleterious state: why does it appear to exhibit far more than the supposed next set of charts by Pietro Vesconte: is it merely a wishful thinking plot and not reality in the extreme areas of the chart. All of these points have been discussed ad infinitum by researchers, but the actual chart I believe has never been the subject of a forensic cartographical examination until now.
The only definite from the above list that can be quantified concerns “Lo Conpasso De Navegare” and that has been shown to be unlikely as the source of the chart using the “Starea” descriptions alone. This paper concentrates on the technical cartographical aspects of the chart, its scale, draughtsmanship and the methodology that was probably used to construct the basic outlines, but at all times uses the LCN as the basic parameter. Whether that is a correct assumption may be argued, but at least it is a basis for evidential research. The Peleio distances are shown to be the primary source of distance measure for the chart with their wind directional component. It is then shown that the actual coastline between node points gained from the Peleio distances is freehand drawn, mostly guessed, but some with real knowledge of the shape and form of the littoral.
The two wind roses are shown to be dimensioned using the same mathematics as the “Tavola De Marteloio” for the 45 degree alignment, that is 71 units, and thus the overpowering square features located in four positions on the chart are quantified.
There are correspondences and also complete differences to “Lo Conpasso De Navegare”, and thus that text does not provide for an adequate guide to the charts origins. But, the Carta Pisane is a carefully constructed chart suffering from the vagaries of poor and corrupt data producing distortion, not magnetic declination, and neither does it produce a chart usable for Pelagic Sailing because of the distortions there-in.
It is however in part well drawn and requires visual assessment over and above the first impression it unfortunately portrays by its state of preservation. 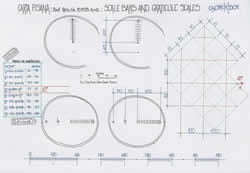 A very short technical appraisal of the works by Piri Reis, debunking previous texts and scholar’s comments, dismissing wild theories via what the charts actually show, not what people wish to believe from preconceived ideas and establishing the credentials of Piri Reis as a mathematician as well as an obvious accomplished draughtsman.
The text is 6, A4 pages and contains 18, A4 (A3) diagrams. 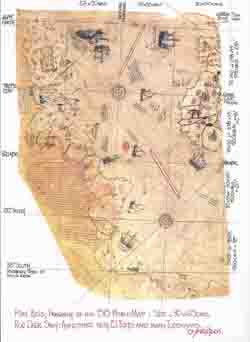 There are five large similar planispheres of which two are clearly “signed” by Diego Ribeiro with the other three nearly exact copies and thus capable of being assigned and dated. This text concentrates on two examples. The first is dated 1525 on its Astrolabe diagram and by a text note, but it is one of the “unsigned” examples and held by the Biblioteca Estense Universitaria, Modena, Italy. The second is the 1529 planisphere, dated and signed and held in the Vatican Library. There are numerous texts discussing the work of Diego Ribeiro but not in a technical manner to explain the knowledge contained there-on, their foundation for design or explain the visually complicated “Declination Diagram” in a simple manner for it to be utilised.
Many other authors have implied that these five charts are in fact as near as possible to the Spanish Padron Real, the Royal Standard Map of Spain. That being the case then it is proven beyond doubt that the Diego Ribeiro Planispheres are the “mythical” Square Chart and thus the Padron Real of Spain is also a Square Chart, latitudes and longitudes are equal and there is no sign of a magnetic slewing of the Mediterranean Sea, it is geographical.
It is also possible to conclude that Diego Ribeiro was a consummate polymath and probably knew M F de Enciso in Seville when his “Geographia” was published in 1519 and certainly Ribeiro has used his text to illustrate these five planispheres.

Held in the Library of Congress are two charts noted as Vellum 9 and Vellum 10. They are very distressed and obviously reduced from a larger format. Dated to C1500 and C1565 because of their visual attributes they have also been noted “as seemingly sharing a common provenance and history and are therefore considered together”. However it is noted the Cartographers are possibly different; that will be dis-proven.

Vellum 10 has a “signature” which appears to have been ignored by the Library of Congress cataloguer and hence this text follows the trail found within the charts to explain their probable provenance and country of origin and the surprising mentions. It is not an orthodox paper, more a journey of discovery.